Unique patented construction. No extra investment in switching from clincher tyres to tubular clincher tyres. Riding properties are equal to those of tubular tyres.

No need to use a rim tape nor glue

The easiest and the fastest mounting from all the tyre types, no tools required

Distinctly the safest behaviour in case of flats without effecting the rider's stability, can be ridden flat in case of emergency

Can be used immediately after mounting 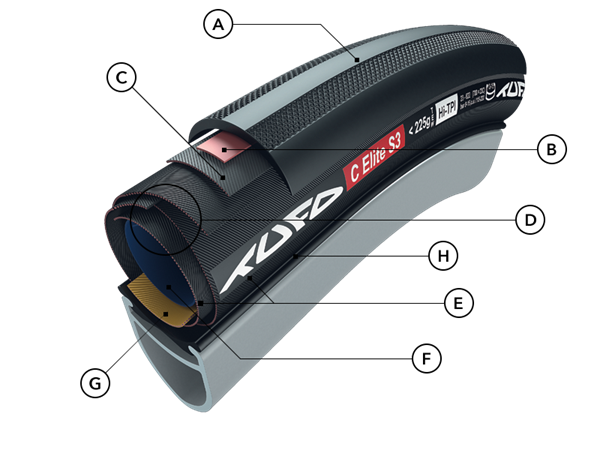 produced either with rubber compound of activated silica, silica or carbon black (specified for each model).
B

located underneath the tread, indicates also tyre wear and higher possibility of punctures when showing through the tread (only in specified models).
C

made of rubber cord composite strengthened with CRCA.
D

consists of two layers of rubber cord composite with reverse bearing cord orientation in each layer, joined and strengthened with CRCA. The carcass TPI varies from 60 to 210 for different tyre models.
F

is made of a special butyl-rubber compound. Very low air permeability of this layer means long intervals between tyre inflations. Solid bond between the airtight layer and the tyre carcass means lower rolling resistance.
G

is made of cotton. It absorbs the glue evenly, resulting in optimal bond between the rim and the tyre.
H 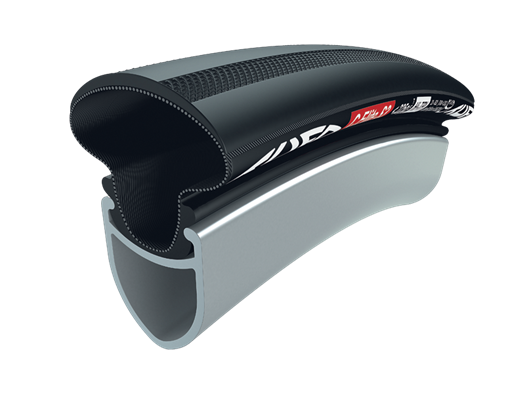 HOW DOES THE TUFO TUBULAR CLINCHER WORK?

When inflated, the tubular clincher, in the same way as a tubular, is pressed towards the rim.